It is widely accepted that the solutions to the dilemma of explaining physical movement (commonly known as Zeno's Paradoxes), lies in assuming that all physical movement is comprised of a continuous, and contiguous series of 'infinitesimal' little movements, which together provide "perfectly continuous" and seamless movement.

The mathematics of calculus has been used to show that we can traverse an infinite series of such movements in finite time, thus enabling our everyday experience of physical movement.

However, this widely-accepted theory relies on an absolute, never-ending continuity, which is at odds with the evidence of quantum theory. A new holodynamic systems model (one that includes a discontinuous-space | continuous meta-space duality) is required to fit the facts.

...(the idea) that space is continuous is, I believe, wrong.

Given the widespread acceptance of the assumption of "perfect continuity" it behoves us to consider a thought-experiment that will help end our reliance on this restrictive1 and ultimately unsustainable machine-world view of life.

Primarily, the thought-experiment utilises the assumption of perfect continuity to disprove one of the key principles of quantum theory (Heisenberg's Uncertainty Principle). Either science's "most successful physical theory"2 is incorrect (in regards to Heisenberg's Uncertainty Principle), or the underlying assumption of "perfect continuity" of physical movement and of physical reality (space-time) is incorrect.

Consider the flight of an arrow as it flies through the air on its way to its target.

The arrow moves through physical space in a trajectory in accord with Newton's laws of motion (e.g. in a parabolic curved trajectory). At each point along that trajectory, mathematically we can say at point 'x' along its path, the arrow will be at 'y' height. Moreover, at any point along its path we can mathematically determine its physical characteristics of position, momentum and rate of acceleration (given known initial conditions).

Let’s imagine we fashion ourselves a particularly fine arrow (one so fine that its tip has been honed to just one iron atom). We were particularly diligent and resourceful when crafting our arrow, to the extent that we accurately determined the number and types of atoms it contained (with their respective atomic masses).

Let's also imagine we fire the arrow in a complete vacuum, so as to not to confuse the issue with friction losses, cross winds and other physical influences.

When geometric series (calculus) is used to calculate an arrows path the assumption is made of perfect continuity – that is, there are infinite points along its path.

Accordingly, at any and every point in time (assuming known initial firing velocity) we can precisely determine the position of the arrow’s lead atom, and its momentum. In effect, we can disprove the validity of the Uncertainty Principle which requires that we cannot simultaneously determine both the position and momentum of an atom.

Either the Uncertainty Principle of quantum theory is incorrect (or at best incomplete), or we cannot assume perfect continuity of movement of any physical object (and thus, on some level, of space-time itself).

This thought-experiment is used to demonstrate how standard mathematical solutions that are reliant on calculus (which are reliant on infinite series), cannot be used to explain the finer movement of physical things.

In effect, the thought-experiment reveals that our machine-world view is outdated, and incompatible with the advances in quantum theory.

When we accept that our physical world and the supporting space-time continuum is not in fact a “perfect continuum”, we must address the issue of what occurs in the gaps (of physical space-time). 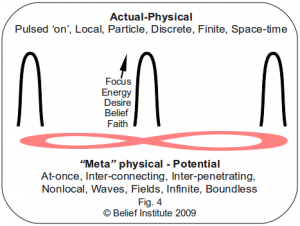 Another implication of the movie-projection metaphor is it requires a nonlocal (or instantly connecting) mechanism to orchestrate the coordinated or coincident refreshing of all the particles that compose our brains, bodies and the entire physical universe.

Bell’s Theorem, regarded by some as the “most profound discovery of science”3 and the supporting experimental evidence, proves that nonlocal (immediate) connections are a fact of life. Nonlocality or some at-once interconnectedness would enable such coordinated refreshing of our brains, bodies and universe.

The deeper ground, and source of our physical world, our brains and bodies ... everything, literally comes from nowhere physical.

Given our individual experiences with intent, will, choice and desire in helping form our physical experience, we may expect that somewhere within our psyche we are “connecting” with that which is rapidly refreshing our reality.4

We can use the metaphor to realise that our relatively slow perception of this refreshment or flickering gives the illusion of “perfectly smooth” movement, just like watching a car-chase on television appears smooth and seamless.

As creative scientists, artists and inventors have recognised, creativity comes through the gaps in the physical frames of life: between our thoughts that keep us glued to the motion pictures 'out-there'.

Quantum theory’s superpositions indicate that any out-of-phase refreshments get to physically occur in alternative universes. Thus, we are in the universe that fits our particular choices and desires.

Schrödinger's cat thought-experiment also suggests we live within an observer-participant universe, one in which we, the observers are helping “collapse” possibility, choice and desire into lived experience.

With this world-view, we can accept that we are in part responsible for the state of our brains, bodies and collectively, the universe.

This requires that there can be no true randomness, leaving us to conclude that self-organising systems, and evolutionary processes occur due to intent.

Ironically, science is again revealing that we are indeed at the centre of our universe, albeit a far more personal and intimate centre than that of religion in Galileo’s time.

With the movie-projection metaphor, we come full circle, realising that ancient wisdoms voiced repeatedly across the ages have merit: what things soever we desire, so long as we passionately believe, we shall have – at least in some universe.

[Note, see how a similar approach using the assumptions of modern science proves the impossibility of physical movement.]