Like many others, I've recently had the great pleasure of viewing Dr Jill Bolte-Taylor's TED talk on her experiences during her stroke.

It's fascinating and quite comforting to be reminded of a dimension to life that many (including myself) frequently experience to varying depths (particularly those who engage the creative, felt-intuitive side to life).

Her description of how the right-hemisphere of the brain is the seat of experiencing the present moment was quite interesting.

All in all, a wonderfully enriching video. Highly recommended..

I was also quite pleased that my Table of One and All ably (albeit with some minor differences*) encompasses her experiences. Her mentioning that the right-hemisphere works like a parallel processor, while the left work like a serial processor confirmed key concepts from my first book (it's reassuring to see validation  for one's previous intuitive statements).

Why I have found her talk on TED particularly interesting was to note that despite her obviously rich and moving experiences, Dr Bolte-Taylor assigns the entire cause of her experiences to mechanical processes in her brain and body.

Normally we would expect such statements and conclusions from a scientist. But where it gets interesting is when we pause and reflect on the fact that for around 80 years, scientists have known that, ultimately, what goes on in the brain and mind cannot be explained in terms of molecules, or brain neurons, or any physical process.

At the heart of physics and mathematics are a number of key theorems that all point towards one simple conclusion ... the source and cause of our everyday physical world is not physical, at least not in any measurable, tangible sense.

Two theorems in particular have caused immense disruption to our Western body-as-machine views: Heisenberg's Uncertainty Principle (in physics) and Gödel's Incompleteness Theorem in mathematics. There have been others in support of these two, primarily Turing's Uncomputability and Chaitin's Randomness Theorem, but all point to the 'irreducible complexity' of our physical world.

The actual operation of intelligence is thus beyond the possibility of being determined or conditioned by factors that can be included in any knowable law ... Intelligence is thus not deducible or explainable on the basis of any branch of knowledge (e.g. physics or biology). Its origin is deeper and more inward than any knowable order that could describe it"1

Now, there's a deep irony here. First are the arguments opposing the validity of Darwinian evolutionary theories, citing 'irreducible complexity' of biological systems (such as bacteria). These irreducibly complex organisms must have had an intelligent designer, it is claimed. The counter-arguments involve digging up intermediary fossils that would prove smooth evolutionary transitions from one species to another. The irony is that it seems neither the scientists nor the religious folk have stopped and asked why the most fundamental building blocks of atoms, light, proteins, biological organisms, people and planets - quanta -  are and will remain (according to Heisenberg) irreducibly complex (in that we cannot expect to entirely understand their nature, or predict their behaviour). Both sides are defending their beliefs while facing away from each other, not recognising they stand on common ground. Each are arguing their cause, each with some (partial) validity, but neither seeing the complementary nature of their views.

Then I began to wonder why so many scientists are so steadfastly holding on to their mechanical world views, in the face of core facts of life that rule out a clockwork universe. Why, I wondered, did they persist with believing that ultimately we can reduce the rich, unlimited felt-experience of life to a few numbers, names and notions?

Control. Hanging on to the en's ... a left-brained bias for numbers, names and notions. The irony being that the end is nigh; both are holding on to the ends of eras - the peak disconnect of head and heart, of conscious and unconscious, of one and all.

* The TOA lumps the future in with the whole of all, which is in deference to our usual serial perception of time - hence why artists, who are more "right-brained" (left-winged, empathic, connected with feelings), are future orientated, intuitive, feeling in parallel at-once, helping to break down or expand past traditions, or disrupt the status quo. This is also why right-winged (left-brained) politicians are conservative - 'conserving the past', frequently harking back to the good ol' days, talking of the importance of tradition, the Bible (a 2000 year old text), etc. 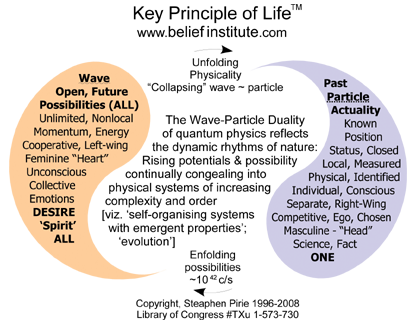