Determinants of health, wellbeing and resilience

This article is an introductory analysis of the factors determining better health, greater wellbeing and resilience.

These factors are derived from the long-term research conducted by Sir Michael Marmot, who has found that one's 'psycho-social ecosystem' is at least two thirds* responsible for the degree of health, longevity and well-being (and the lack of, in the case of disease, depression and anxiety).

* According to the research, factors such as smoking, obesity, poor diet, lack of exercise and hereditary issues account for only 1/4 to 1/3 the total cause for ill-health and premature death.

In the 2003 World Health Organization’s report on social determinants of health, Dr Michael Marmot and Dr Richard Wilkinson reported that:

“Even in the most affluent countries, people who are less well off have substantially shorter life expectancies and more illnesses than the rich. Not only are these differences in health an important social injustice, they have also drawn scientific attention to some of the most powerful determinants of health standards in modern societies. They have led in particular to a growing understanding of the remarkable sensitivity of health to the social environment and to what have become known as the social determinants of health."1

The research into social determinants of health is sufficiently broad and rigorous to link social factors with corresponding levels of health and life expectancy.

As the report goes on to explain,

“Life expectancy is shorter and most diseases are more common further down the social ladder in each society. Health policy must tackle the social and economic determinants of health.”2

This research has clear implications for employers when developing workplace policies.

A landmark study conducted by Dr Michael Marmot during the 1990’s on British Civil Servants, found that the usual physical, life-style suspects in causing disease (smoking, diet, lack of physical exercise, obesity, heredity) accounted for around one quarter of the causes.

As Professor Emeritus Len Syme of University of California explained,

“those factors explain something like 25% - 35% of the gradient (variance), but the rest is unexplained by those factors.”3

From similar such studies, physical factors can be ruled out as the primary cause of ill-health and premature death.

To account for the short-fall, Professor Len Syme believes he has an explanation: “My hypothesis is that it's control of destiny. And what I mean by that is that the lower down you are in social class standing, the less opportunity and training you have to influence the events that impinge on your life.”4

When “control of destiny” is taken into account, the variance in health across social strata disappears. That is, research indicates that it is the degree of control of one’s destiny that primarily causes the large difference in health in our society.

“psycho-social factors are related to the vulnerability and defences that people have to disease, not to what disease you get. So that these factors affect the body's defence systems and make you vulnerable to smoking and cholesterol and viruses and so on.”5

"Where you stand in the social hierarchy is intimately related to your chances of getting ill, and your length of life ... The higher the status in the pecking order, the healthier they (you) are likely to be. In other words, health follows a social gradient. I call this the status syndrome.6

"Autonomy - how much control you have over your life - and the opportunities you have for full social engagement and participation are crucial for health, well-being, and longevity ... Degress of control and participation underlie the status syndrome."7

Marmot's research confirms that it is primarily social participation, levels of control, and respect from peers, family and the general community that engenders good health ...

As Marmot goes on to explain:

"In the age of the genome and high-tech medical care, thinking about health typically turns to biology and technology. The discovery of how important control and participation are for health leads in a different direction: to the circumstances in which we live and work."8

"The key (to good health) lies in that most important organ, the brain. The psychological experience of inequality has profound effect on body systems."9

By analysing the relationships of individuals to their communities (using the hermeneutical approach), we may understand the role of personal and collective beliefs in the area of health, and dis-ease prevention.

As Norman Cousins found when recovering from a debilitating illness, "

“Drugs are not always necessary. Belief in recovery always is.”10

It is therefore prudent to consider the nature of the restrictions on our ability to "control our destiny" (in as many contexts as possible) with the expectation that a healthy, confident and fulfilled individual, within a healthy, supportive cultural and physical environment will promote good physical and mental health.

Broadly speaking, (and putting aside the life-style causes, such as diet, smoking etc, that are secondary issues) we can analyse the primary factors that help promote a healthy “psycho-social ecosystem” which underlie good health as follows:

Each stratum is inter-related and interdependent with each other, and each will affect levels of health of people in organisations and the wider community.

However, in terms of employee well-being, the organisational culture and systems instituted will have primary relevance to each employee's ability to control their career destiny (as revealed in Marmot's study of British Civil Servants).

The over-riding issue is ability to be productive and valued, without undue stresses due to financial, social or organisational constraints and inequalities.

In many social experiments repeated across decades of research, incentives in the form of cash rewards given for faster or more creative solutions to problems usually results in poorer performance.

As Daniel Pink explains in his TED presentation: 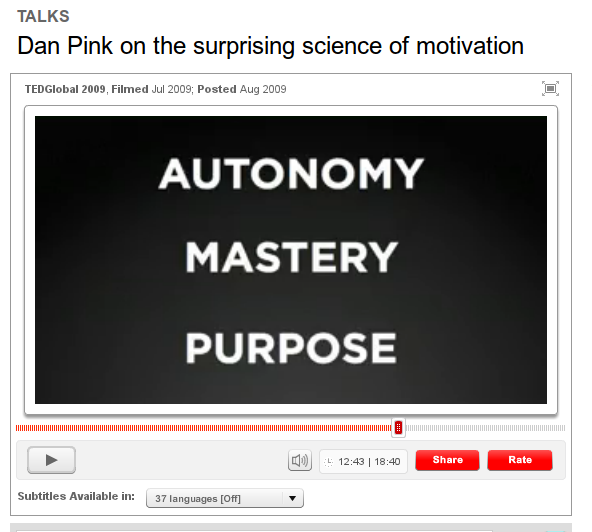 You've got an incentive designed to sharpen thinking and accelerate creativity, and it does just the opposite. It dulls thinking and blocks creativity.
...
This has been replicated over and over and over again, for nearly 40 years. These contingent motivators — if you do this, then you get that — work in some circumstances. But for a lot of tasks, they actually either don't work or, often, they do harm. This is one of the most robust findings in social science, and also one of the most ignored.
...
If you look at the science, there is a mismatch between what science knows and what business does. And what's alarming here is that our business operating system — think of the set of assumptions and protocols beneath our businesses, how we motivate people, how we apply our human resources — it's built entirely around these extrinsic motivators, around carrots and sticks. That's actually fine for many kinds of 20th century tasks. But for 21st century tasks, that mechanistic, reward-and-punishment approach doesn't work, often doesn't work, and often does harm.

From the NewScientist article "Inequality: Of wealth and health"

"Growing evidence shows that greater inequality brings with it more crime, worse public health and social ills that affect every tier of society."

"Increasingly, we're coming to understand that even if you have a stable job and a middle-class income, then your health is not as good as that of someone who is in the 1 per cent.

"The magnitude of inequality damages social cohesion," says Marmot. "The rich live separate lives from the rest of us, live in different neighbourhoods, send their children to different schools." When the wealthy pay directly for the necessary services in their lives, they become less willing to spend tax money on everyone else, which begins to erode public services and creates a hierarchy of quality. "The whole argument against a service for the poor and a different one for the rich is that a service for the poor is a poor service," Marmot says. "That really says we are not one society."

"a more even distribution of wealth would improve health on national and global scales. But that appears unlikely to happen without a radical shift in western political culture; in recent times governments of all political persuasions have presided over growing inequality."