What is Integral (Holodynamic) Systems Thinking?

Many business executives and leaders will be familiar with Peter Senge's Systems Thinking, Learning Organization principles.

But what's the elephant in the room that so few are willing to acknowledge, let alone use and apply for productive results?

Senge's systems thinking edges towards that ethereal paradox of life, of needing to think about, be part of, and contribute to something greater than ourselves - the organisation, community, nation and world within which we work and live.

Research reveals that having a "sense of community" – of contributing, and being valued by others – is an important element in happiness, fulfillment, well-being and productivity.

The "elephant" is not directly observable, in that just as we may focus on an individual (ourselves), or on some individual group (us), the perception of some whole that is greater than the sum of its identifiable parts requires that we shift our perception and awareness beyond direct thought and identification, and thus, beyond science.

In the article "Determinants of health, wellbeing and resilience", the focus on the physical determinants to well-being is a natural consequence of thinking that our bodies and brains are complex machines.

With the developoment of computers, we have likened the brain to a complex computer (the basis for various attempts at creating Artificial Intelligence or AI).

As Dr Norman Doidge has explained, this brain-as-machine view is the legacy of scientific advances dating back to Isaac Newton's era.

"for the longest time, for 400 years, we thought of the brain as like a complex machine with parts. And our best and brightest neuroscientists really believed that. It was a mechanistic model of the brain and machines do many glorious things, but they don't rewire themselves and they don't grow new parts. And it turns out that that metaphor was actually just spectacularly wrong"1

With the development of the Internet, scientists have in more recent times likened the brain to a complex network, in which influences and processes operate in parallel, and are interdependent.

As the systems and networks become more complex, the interacting processes and influences are seen to operate more in parallel, simultaneously ("at-once"). Synchronicity between members of animal groups (such as school fish moving in unison, or crickets chirping) becomes more evident.

The body-as-machine model, however, is based on the idea that parts influence other parts in a step-by-step, sequential method. As scientists are beginning to learn, this serial step-by-step process involves small time-delays which compound in complex systems, to the point that the various influences simply cannot "get around fast enough" to properly coordinate and operate such systems.

Researchers in the field of quantum physics have now discovered that another "mechanism" operates to coordinate complex molecules and biological systems on a deeper level. This mechanism, in contrast to step-by-step "local" forces, operates at-once, without time-delay - via, what scientists call, "nonlocal interactions".

As physicist Paul Davies explained, a complex protein, when performing its function:

seems to sense the needed final form and go for it. To achieve this action, widely separated portions of the protein have to move in unison according to an appropriate global schedule, otherwise the molecule would get tangled up in the wrong shape. This activity, which is a result of a plethora of quantum interactions, is clearly non-local in nature.2

have found that in the typical quantum state occupied by any group of particles the links between the particles are mostly of a nonlocal character. Quantum theory isn’t just a tiny bit nonlocal. It’s overwhelmingly nonlocal. Nonlocality is the rule for our Universe.3

These at-once interactions underpin all of everyday life, as Herbert explains:

"these unmediated (nonlocal) connections are present not only in rare and exotic circumstances, but underlie all the events of everyday life. Non-local connections are ubiquitous because reality itself is non-local.”4

A consequence of these connections occuring instantly, or "at-once" is that they are not discernibly physical, in that we cannot experience them through our normal physical senses, such as sight, hearing or touch (sight, hearing and touch operate at or below the speed of light).

It is for this reason these "at-once" interactions are little understood or acknowledged in the various scientific disciplines, even though physicists have devised theoretical proofs and experiments to (indirectly) confirm their existence.

They are, in a literal sense, meta-physical interactions that are beyond direct scientific observation, and therefore cannot be caused by any physical system, organ or materials.

Where this has particular importance is in understanding the deeper causes of our thoughts and conscious awareness.

The actual operation of intelligence is thus beyond the possibility of being determined or conditioned by factors that can be included in any knowable law ... Intelligence is thus not deducible or explainable on the basis of any branch of knowledge (e. g. physics or biology). Its origin is deeper and more inward than any knowable order that could describe it.

Which is to say, the brain of itself cannot be the root cause of thought, or intellect.

With the foregoing in mind, physicists are now investigating how these networks of nonlocal fields and connections are helping us think, choose and live healthy lives.

In everyday practical terms, these nonlocal connections and influences provide a framework for understanding the role of systems, and of their "downward causative" influences on the employees ("parts") within any functioning organisation ("whole"). 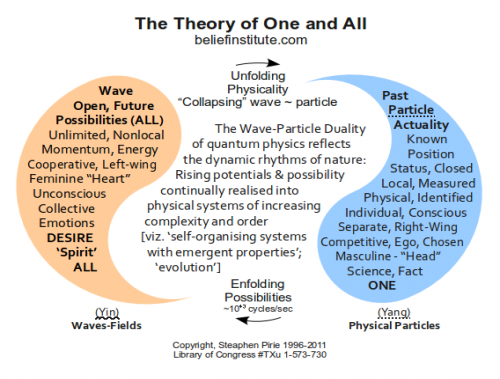 See also (this site):
BE and BECOME (The Principle of One and All)
See also (web):
What does 'holodynamic system' mean? (stephenpirie.com)
Categories:
Integral Systems Thinking