The quantum physics of gender

Nick Herbert's "Quantum Reality: Beyond the New Physics" is regarded on Amazon as "a classic" and "a must read, a must re-read" book on the subject.

One paragraph in the book explaining the behaviour of an electron was for me a catalyst for an important ah-hah experience:

"As a particle, it must be localized in space, cannot be split apart, and retains its identity in collisions with other particles. As a wave, it spreads over vast regions of space, is divisible in an infinity of ways, and merges completely with other waves it happens to meet.

Herbert was explaining how matter and energy behaves as both waves and particles (in a complementary manner, at the same time).

In a flash it all made sense: Men are particles, women are waves, roughly speaking. Men tend towards the individual particle nature: the hard-shelled ego strongly identified, the masculine tendency towards retaining their competitive identities in "collisions" (sports, wars) and towards the extremes of behaviour (hence the preponderance of male murderers and musicians).

Women on the other hand tend towards the collective-wave nature of "merging" with communities (focused on family, relationships, feelings, communication, nurturing the group by not being extreme or disruptive etc.).

At various times since that initial ah-hah moment, I've experienced avalanches of ideas and associations, with one occasion in particular requiring me to pull over while driving so that I could write down the flood of correlations.

However like any scientist (but not as one), I'm always keen to put the Theory of One and All1 to the test, even though I intuitively feel its universal validity.

With the benefit of the TOA, we can make sense of the behaviour of the elementary particles comprising the atoms and chemicals in our brains and bodies.

It's how the components join, or don't, that gives rise to the noticeable differences in characteristics of particles, atoms, animals, people and planets.

Recently I started to look again at the field of quantum theory, and wondered how the fundamental building blocks of atoms (quarks, leptons and the like) would fit the TOA (Theory of One and All).

Once again, I was surprised by how easy things fell into place.

As it turns out, subatomic particles of matter and light (photons) can be categorised as being either Fermions or Bosons.

Essentially, fermions are elementary or composite particles (e.g. protons, neutrons, atoms) that obey the Pauli Exclusion Principe: no two can occupy the same space (and have "part" or odd spin).

Bosons, on the other hand (e.g. photons of light), can and do occupy the same space (share wave-functions) and have "whole" integer spin.

In brief: fermions must occupy their own space, and have partial spin.

Bosons merge and share, and have whole (integer) spin.

All of which ties in with the Theory of One and All, as summarized in the "Table: Sexing the small bits".

When researching for my new (soon to be online) course "Gender Dynamics", I collated data from various sources, and noticed that the basic fermion-boson pairing is more informative of gender behaviours, than my original wave-particle pairing.

That said, the wave-particle pairing ("complementarity") does generally indicate gender biases (e.g. "it's a woman's prerogative to change her mind", amid the boundless possibilities inherent in the wave nature. Men not so much -- they're expected to be more dependable, precise, detailed (particle-natured)).

Long story short: by looking at the 4 space-time quadrants (future-wave, past-particle, boson-togetherness and fermion-separateness), a great deal falls into place, regarding the dynamics of gender. In fact, by combining the spatial pairing of boson-fermion, with time pairing of wave-particle, "everything" falls into place, when seeking to understand the data (e.g. that gay and straight males are both visile, while lesbian and straight females are verbal/haptic. All fits. Course details will be posted here when available.

Some of the above is explained in "Simple Tools for Clarity, Understanding and Betterment"

The book which details more of the above - The Dynamics of Gender and Life: Timeless Principles of Quantum, Fractal and Natural Phenomena, and Human Social Dynamics, is available at https://procreative.com.au/product/the-dynamics-of-gender-and-life 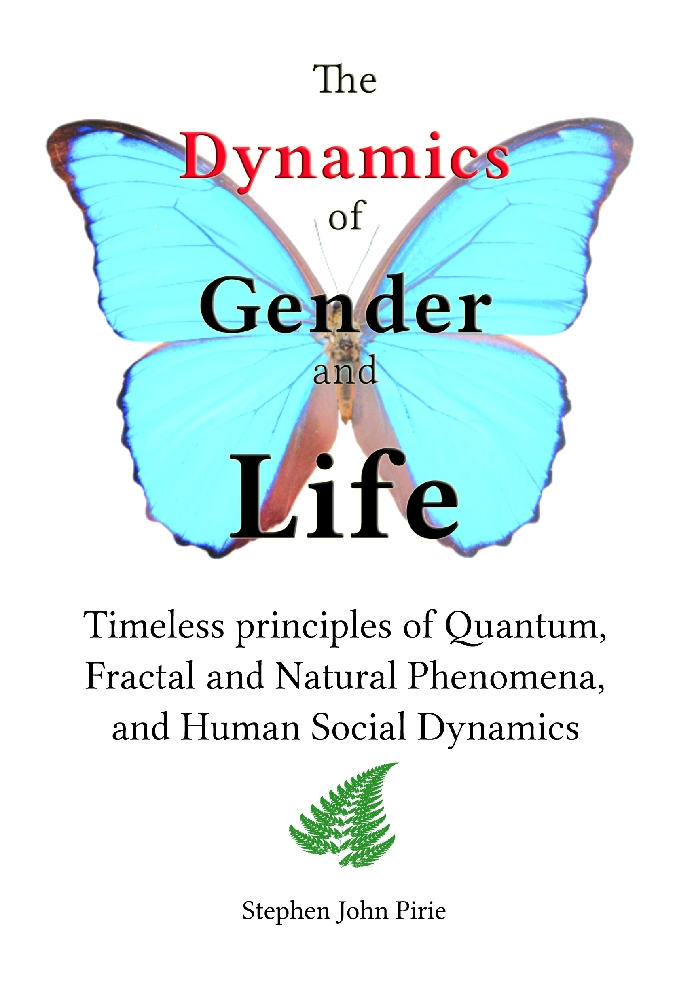 [Excerpt Be and Become, © 2000] - / update: see The Evolution of the Human Psyche for greater context regarding the following points, especially the bias toward 'separateness'. 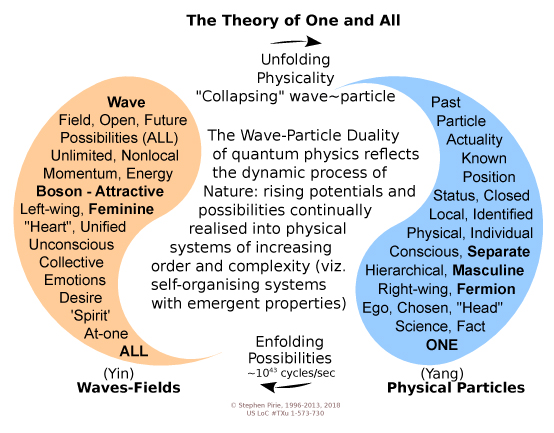